Facebook will now allow mobile users to add a 7-second looping video as a profile picture, in a move to make the social-networking site more lively. Facebook has brought in five major changes to the profile, including an option to pin featured photos at the top of the profile. Do you want to change your profile pic to new loop-video profile? Read the instructions provided at the end of this article.

Users can now choose a temporary photo that will revert back to the original, after a specified period of time. About info has been added with easier visibility controls, including a new 100 character bio field. Photos will now be centered on the screen, are larger and support animation. These changes would make Facebook addicting and visually enticing. The features began to roll out today, and is being tested for some users.

‘We are just trying to balance out information that might be more important to people when they’re visiting profiles,” said Aryeh Selekman, Facebook product manager.

Unlike the old template, the new mobile features give priority to the visual content of the user. Basic information like birthday, place of work, school, and displays a brief emoji-supporting bio along with the publicly shared photos below. The redesigned template now shows a multi-section grid of pictures split between “features” and”recent,” and the timeline has been downgraded to a bookend.

Facebook project manager Aigerim Shorman said that the new profile is designed to highlight “whats going on in their life, what’s important to them now in more expressive ways.” The most recent post you shared probably might not help in revealing information about your identity. Thus, Facebook is giving more importance to biographical info and photos of you. As the user bio gets more attention, users are likely to update their profiles, in turn helping Facebook’s advertising engine. In 2010, Facebook made a major change, allowing them to gather data on where people live, where they went to school and where they went to work for advertising.

Users can click on the profile pic to record or upload a new 7-second loop video. The looping video will play without sound, unless clicked. Featured Photos allows users to select five photos that could give a clue to others about your identity. Facebook has given importance to mobile design, with a bigger left-aligned profile pic or video, and instead of small panels that reveal details about friends and photos, Facebook is providing two big sections pinned below the profile pic and above the timeline.

How to add loop video as profile pic on Facebook?

In order to change your current boring image based profile pics to a brand new 7-second looping video (Facebook Profile Video), you should update your current Facebook mobile app (Android or iOS), then you should visit your profile and click on the profile pic where you will be prompted to Upload Photo, Choose from Photos, View Photo, and Profile Video at the end. 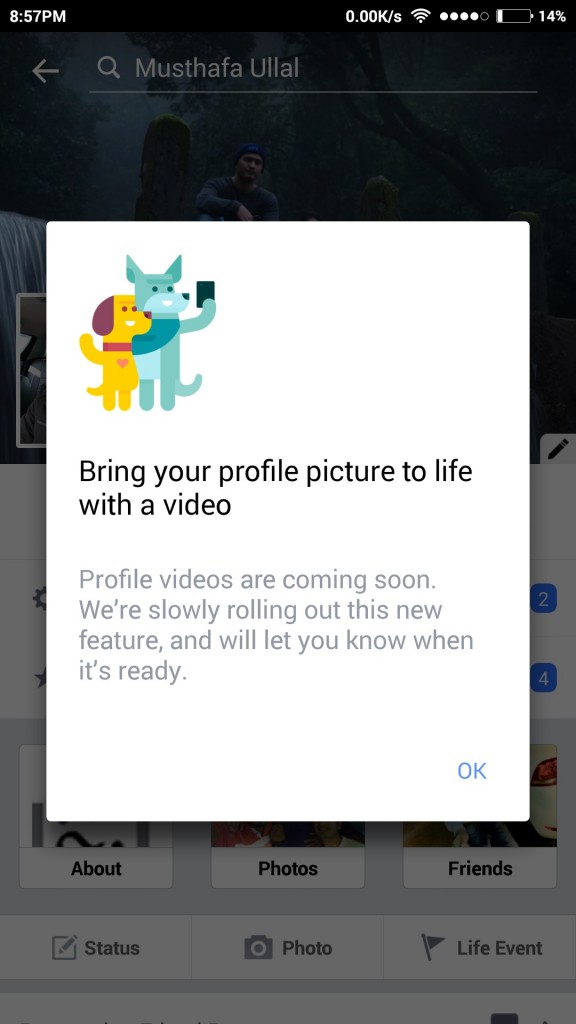 If you are welcomed by a “Coming Soon: Profile Videos,” then you should have to wait until FB rolls out the feature for you. Currently, the social network is slowly rolling out its Profile Videos option to users across the world. Don’t worry, you’ll get it, be patience. There are no other workarounds to get small looping video as your profile pic.