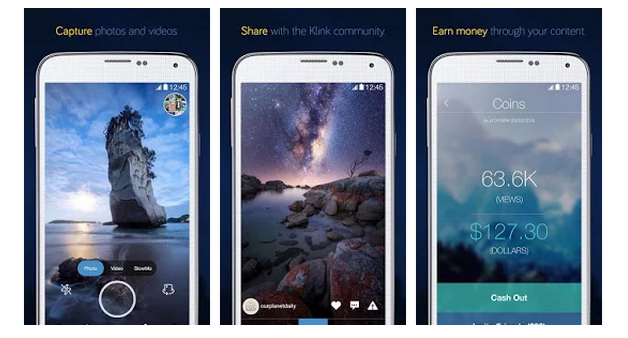 The new photo-monetization feature by Klink is all set to create a whole new buzz among the Instagram users, because it comes to be an extraordinary counterpart of the photo-sharing social media apps.

The most striking features of this app are that you can share photos in their full size, unlike Instagram and also, share 20-second videos, unlike Instagram where only a 15 second video is allowed. The users can make great edits before posting them on their feed, by using cool filters and striking montages to videos and images that are to be shared.

Also, these photos can be shared on Facebook, Twitter, etc., to gain more followers and to spread their message. It also comes with computer vision processing that allows users to find just the right amount of content when they look for it in the app.

The new monetization feature on Klink claims that a user can earn up to $2 just by having 1000 views on the content that they share. This makes Klink not only a fun app to use, but also helps in earning monetary benefits as an added value. There could also be additional earnings for a user if he/she invites friends to join this app. It also comes with in-app purchases that enable the user to boost their visibility. This app is currently said to be on beta version for all the Android users, but for the iOS users, it is readily available on the iTunes app store.

Taylor Pierce, who is the CEO of Klink, goes on to say that though the app is small, it turned out to be a successful YouTube channel. She further said that the people need to be compensated for the creativity that they project, and that’s why Klink is uniquely special from the other apps.

Klink can be downloaded for iOS and Android devices.