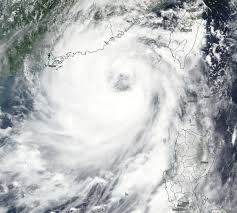 On August 2, typhoon Nida rush through Hong Kong, most o financial hub was closed with gale-force winds and troublesome hundreds of flights, while low-lying areas were put on flood alert.

Typhoon Nida is the enough strong to gusts of more than 100 km per hour earlier making landfall I China’s Guangdong province and observatory to issue an amber warning, signifying heavy rain, at 5.20 am Hong Kong time.

Airport Authority said, more than 150 flights were cancelled with cathay pacific and Dragonair warning none of the flight could be fling until 2 pm. However, Hundreds of passengers were trapped at the airport and 290 flights delayed.

According to the Hong Kong Observatory, Nida was moving gradually towards inland areas of Guangdong and it had showed weakening at the center.

Due to number 8 storm signal Hong Kong Exchanges and Clearing Limited (HKEX) announced that the morning trading in its securities market, including Shanghai-Hong Kong Stock Connect trading, and derivatives market has been delayed.

If signal remain 8 or more then, the morning trading session at the Hong Kong stock exchange will be suspended, stock market will be shut for rest of the day, and Streets were largely empty and shops shuttered since August 1 evening, it was assisted by many people by leaving work early.