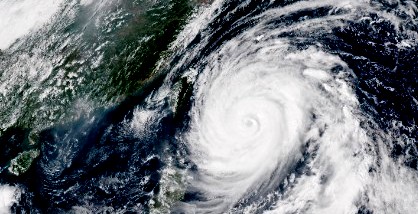 Taipei: On Tuesday, Taiwan has call for blackout as it faces its third typhoon in two weeks. Thousands of residents have been evacuated from affected area, schools and offices were place closes and hundreds of flights disturb.

After Tuesday it is expected to carry landfall in eastern Taiwan, by now its carrying heavy rain and violent winds in the island.

According to the Central Emergency Operation Center, more than 5,000 people are evacuated and 2000 people move to shelter. About 36,000 households have lost power due to the typhoon so far.

Total 575 domestic and intentional flights were cancelled, 109 delayed in the morning and the schedule of train running late.

To the lead of the storm more than 3,700 tourists had evacuated in the weekend as Green Island and Orchid Island are famous in tourist.

At around 0030 GMT, Typhoon was 220 kilometers southeast of the eastern county, Hualien, packing gusts was 198 kilometers per hour.

According to Taiwan’s weather bureau, it was moving forward at a rate of 18 kilometers per hour lower in speed previously forecast and make landfall around 0900 GMT on Tuesday was delayed.

Hualien and Taitung visitor’s places popular for landscapes and coastlines were in notice line.

Powerful Meranti hits these areas former to this month was ever strongest in the 21 years, still both areas trying to recover from it.

Meranti, killed to one man before killing to 28 while moving towards eastern China, followed to smaller Typhoon Malakas.

Through mountainous regions in eastern Taiwan we could see total 900 millimeters of rain throughout Wednesday increasing the risk of landslides. More than 35,000 soldiers are in support of providing help to affected people.