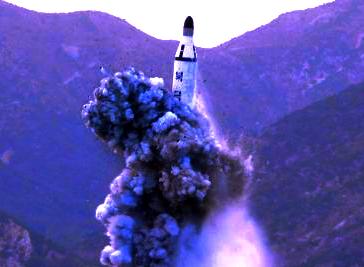 The U.S. Strategic Command and South Korea’s Office of the Joint Chiefs of Staff said the missile was launched from Kusong city but failed in its mission on Saturday; it was intermediate-range Musudan.

The missile launched sudden after South Korea and the United States reached to decision in the Washington to boost military and diplomatic efforts to oppose the North Korea’s nuclear and missile danger.

The two militaries said, it was eighth attempt in a seventh month by the North Korea to launch missile test with range of 3,000 km (1,800 miles).

The South’s Joint Chiefs of Staff said in a statement, “we are strongly oppose North Korea’s missile attempt of illegal acts of annoyance,”

South Korea’s Joint Chiefs of Staff and the U.S. Strategic Command said, they supposed to missile was a Musudan intermediate-range ballistic missile.

North Korea launched a missile in June of a Musudan which is of range 400 km (250 miles), more than half the distance to Japan and was considered to be success by the officials and experts in the South and the United States.

In discussion between two countries, that is U.S. and South Korean foreign and defense ministers, said, they will set high profile group that will influence entire extent of the information, diplomacy, economic elements and military coordination to face North Korea danger.

John Kerry, U.S. Secretary of State, was taking before failed missile launch, said, the US will take all suitable actions to defend itself, South Korea and other associates against North Korea.

Kerry state, as part of military effort, the US would arrange the Terminal High Altitude Area Defense anti-missile system to South Korea as early as possible.

China strongly oppose the interference of the US it would impose on its own strategic anticipation.

Yun Byung-se, South Korean Foreign Minister, was taking before launch of missile by the North Korea said; he will put all efforts to defend themselves.