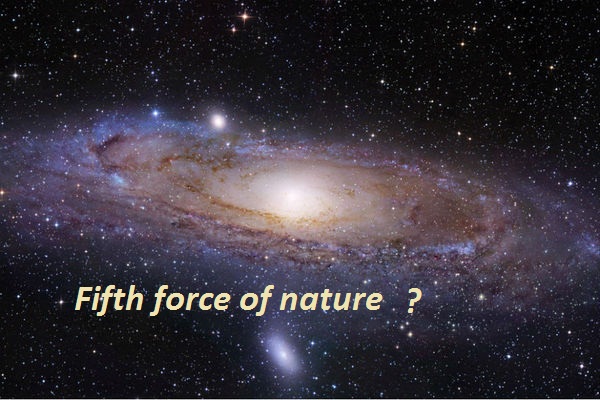 New York: we are well known about four forces of nature are electromagnetism, nuclear and gravitation forces, recently scientist have discovered fifth force of nature in the universe.

According to theoretical physicists at the University of California – Irvine (UCI), US, previously found subatomic light particle may be fifth fundamental force of nature and key to understanding dark matter in universe.

If it true, may be revolutionary. Discovery of possible fifth force would completely change our understanding of the universe, with cost for the unification of forces and dark matter,” explained Jonathan Feng, Professor of physics and astronomy.

The researcher reached to the decision in mid 2015, when they study by experimental nuclear physicists at the Hungarian Academy of Sciences who were searching for “dark photons.”

These particles indicate unseen dark matter which makes up about 85 percent of the universes mass, physicists say

The Hungarian work exposed that, a radioactive decay incongruity indicates the existence of light particle those are just 30 times heavier than an electron.

“The experimentalists weren’t able to claim that it was a new force,” Feng said.

He added in journal Physical Review Letters, “They have found in continue events particle but not sure whether it was a matter particle or a force-carrying particle,”

The UCI work demonstrates that in its place of being a dark photon, the particle may be a “protophobic X boson.”

Normal electrical forces acts on electron and protons, this newborn boson interacts only with electrons and neutrons and at an extremely limited range. This discovery opens entirely new fields of inquiry.

This potential fifth force might be togetherness of electromagnetic and strong and weak nuclear forces “resultant as a one magnificent, more fundamental force.”

“In a broader sense, it fits in with our original research to understand the nature of dark matter,” the authors noted.