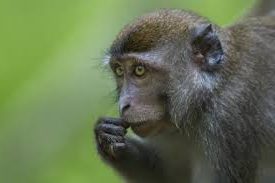 Toronto: Climate change constitute a huge threat to the survival of the primate populations, which includes lemurs, monkeys and apes especially in southeastern Brazil, Central America, Amazon as well as portions of East and Southeast Asia, says a study.

The researcher analyzed effect of expected future temperature and rainfall changes over human and primates.

Study found that 419 species of non-human primates like tarsiers, lemurs, monkeys, lorises and apes will experience 10% more warming than global averages while some primate species experiencing increases of more than 1.5 degrees celsius in annual average temperature for every degree of global warming.

They analyzed few hotspots of primates to climate change, their endanger status and harshness of climate changes at each location.

Most extreme hotspot out off all showed 10 per cent of all hotspot scores, which covers total area of 3,622,012 square kilometers over the ranges of 67 primate species.

The highest hotspot scores occur in Central America, the Amazon and southeastern Brazil, as well as portions of East and Southeast Asia. Prime province for some of the world’s best known primates who call these areas home, showed the findings published in the International Journal of Primatologist.

Graham said, “our finding can taken priorities for ongoing efforts and human intervention on species may also increase that species ability to withstand the growing pressures of climate changes,”