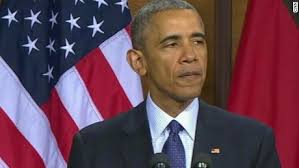 WASHINGTON: On Wednesday The Obama administration said, 400 million in cash paid to Iran soon after the release of five Americans in custody by Tehran was not payment as some Republicans have charged.

On 16 Jan five were released including Washington Post reporter Jason Rezaian, in exchange of seven Iraninans held in the United States for sanctions violations. The prisoner deal and lifting of international sanctions against Tehran was coinciding.

The United States said, it has developed very old Iranian claim at the Iran-U.S. Claims Tribunal in The Hague, releasing  fund of about $400 million stationary since 1981 along with $1.3 billion in interest that was payable to Iran.

The funds were part of a trust fund Iran used before its 1979 Islamic Revolution to buy U.S. military equipment that was tied up for decades in litigation at the court.

In response to a Wall Straight Journal article that Washington secretly organized the cash airlift, The United States, under President Obama, has not paid a ransom to secure the release of Americans unfairly in custody in Iran and we’re not going to pay a ransom,”

Earnest told in the meeting, that Republicans who were long opposed the Iran nuclear deal, now are looking for how the money pay to Iran and dent the deal. “They’re struggling to justify their opposition to our engagement with Iran,” he added

However there is no fixed timing of the payment, Iranian worried about Obama administration. It may face lot of domestic political challenges once they delayed acting on the court decision.

Due to international consent against Iran, the payment, made in euros, Swiss francs and other currencies, had to be made in cash, U.S. officials argue.

One U.S. official said the $1.3 billion in interest was paid to Iran through the U.S. Treasury-administered Judgment Fund, which is used to pay awards against the United States.

Trump said in a Twitter post, “Our incompetent Secretary of State, Hillary Clinton, was the one who started talks to give 400 million dollars, in cash, to Iran. Scandal!”

Reince Priebus, Republican National Committee spokesman said, “The Obama-Clinton foreign policy not only means cutting a dangerous nuclear deal with the world’s number one state sponsor of terrorism, it also means paying them a secret ransom with cargo planes full of cash.”

Paul Ryan, House Speaker deliberate to say, “If true, report clears that this longstanding doubt that administration paid a ransom in exchange for Americans unfairly in custody in Iran.”