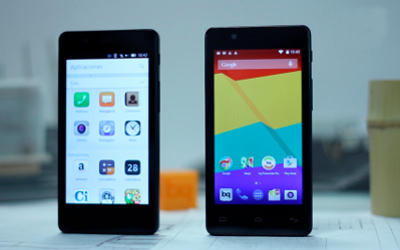 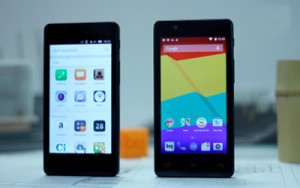 The new phones released last month, which based on Linux operating system. And now in India Aquaris E4.5 and Aquaris E5 are available to purchase. Costumer can buy it from online website like Snapdeal.

Ubuntu, a popular operating system commonly used on desktop, laptops and server, debuted for smartphones last year. The Aquaris E4.5 Ubuntu Edition is based on a 4.5 inch screen with a 540×960 resolution, and runs a MediaTek Quad-core Cortex A7 processor with 8GB of internal memory and 1GB of RAM. It also features a 5 megapixel front camera and 8 megapixel rear camera having autofocus, dual flash and Full HD video recording capability. It is powered by a 2,150mAH Li-Po battery.

The Aquaris E5 is based on a 1.3GHz quad-core Cortex A7 processor, 1GB of RAM, 16GB of internal storage, a larger 5-inch HD screen with a 720×1280 resolution. Its main camera is 13 megapixels based on a high-quality Lagran lens and a BSI sensor. Powering the phone is a 2,500mAH Li-Po battery.

These phones are both dual SIM, but are not 4G capable. Incorporating a system termed as  ‘scopes’ the phones include purpose to made programs for the Indian market such as Eros Now, NDTV, Star Plus, Times of India, Zee TV and Zomato.

One thought on “Linux Based Ubuntu Phones: Aquaris E4.5 and E5 Now In Market”